Valvy is a fictional city in the Belgian province of Hainaut. The town is located in the north of the province, about 30 kilometres from Brussels and 80 km from Lille; the city centre is close to the border with Flanders. The city has more than 13,000 inhabitants

The city of Valvy is situated on the old Roman road Bavay-Asse. it belonged to Brabantgouw in the Carolingian period. From the 12th century, it was part of the county of Hainaut after it had first been in the sphere of influence of the duchy of Brabant for a short time. Valvy was mainly known for the production of tapestries. At least from 1486, the town had a chamber of rhetoricians . It belonged to the diocese of Kamerijk (Cambrai) until 1566

Valvy gave its name to a French duchy and to the commune of Valvy-Les-Bains, a suburb of Paris, due to a complex series of family successions.

The city of Montmorency, at the heart of the duchy, continued to be known as “Montmorency”, despite the official name change, but the name “Valvy” stuck to the nearby lake and marshland that developed later as a spa resort and was incorporated as the commune of Valvy-Les-Bains in the 19th century.

Despite its small size, Valvy offers the appearance of a real town with many old houses (17th, 18th and 19th centuries).

The factory of Subry and Band et Bavre. They make and export dry stored food for the city. 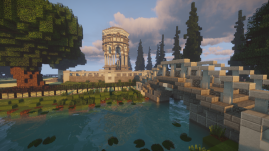 The beautiful park of Valvy has it first remains from the 11th century. Discover the ancient monuments of the kings.

3)Capuchin church and monastery (Capucijnenstraat no. 5) with a museum of the Arenberg family

The Saint Nicholas Church is the church in the centre of the city of Valvy in the Belgian province of Hainaut. Since August 22, 1947, it is a protected monument

In the course of history, the church has been destroyed, looted or struck by fire several times and has been restored several times. In 1347 the first main altar of the church was dedicated. The church burned down at the beginning of the 15th century, and even after the reconstruction, there were several fires.

In the tower, there is a carillon with 51 bells, the oldest of which dates back to 1566.

The railway station was a very important factor for the city, it gave an economical boost at the beginning of the end of the 19th century. The city expanded and more people came to find a job in the rising industry of the nearby factors.

This city is based on several places all over Belgium. Mainly from Ath, Antwerp, Edingen, Geraardsbergen, Herne, Lessines, Oetingen.